Rye River Brewing Company has been making award winning beers in Celbridge, Co Kildare since 2013.  They produce the River River Brewing Company, Rye River Seasonal and McGargles range of beers and also brew exclusive beers for some of Ireland’s biggest retailers.  These include Lidl, Tesco and Dunnes Stores.  The brewery have been creating new Ales, Lagers and Stouts for the last 8 years with a beer to suit all tastes.

Their processes for each beer are refined, perfected and set in stone.  So, when it’s time for the beer to leave their brewery, they know it’s going to taste perfect, wherever you drink it.

“Our mission is to make great beer. We strive to make every drop of it just as good as the last.”

While working with them, their employees identified process improvements that could be made within their own work areas.  These Lean projects were in Wasted Time, Inventory Cycle and Forecasting Free Racking.  A brief outline of these projects is described below.  You can also read the full case studies below. 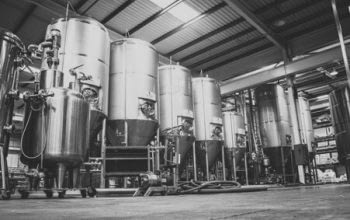 In this first case study, their employee identified that there was too much time wasted waiting to mill the bags of grain for each brew.  He saw that this time could be better used by the brewers if the process time could be shortened.  Read the full case study here.

In this second case study, an employee saw an opportunity to increase the accuracy of the racking board to 95%.  In addition, she sought to improve traceability of the products.  Furthermore, the business wanted to save time on stock reconciliation.  Finally, Rye River wanted to increase book stock record accuracy.  Read the full case study here.

This employee identified an issue with forecasting free racking.  By way of background, when QC stock has been checked and verified, the staff need to move it to racking. Currently, racking is chosen on a first come basis.  However, this can lead to racks overflow.   Read the full case study here.

We hope you enjoyed reading about Rye River Brewing Case Studies.  You may also be interested in our other case studies.

We are a Lean Business Training Consultancy based in Dublin, Ireland.  Our Consultants specialise in the provision of training, mentoring and software solutions in all matters related to Lean Business Process Improvements.

Request a Call Back